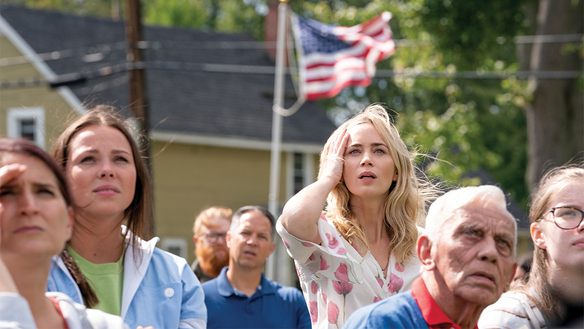 Cinematographer Polly Morgan remembers seeing “A Quiet Place” when it hit theaters and being terrified. As a young mother watching Emily Blunt’s Evelyn Abbott giving birth in a tub and later putting her crying baby in a box to save it from the creatures, she was fearful. “It was a family drama, and I cared about these characters, even though it was a horror film,” she says.

Morgan’s top priority on Pt. 2 of 'A Quiet Place' which hits theaters May 28 after more than a year’s delay due to the pandemic, was to stay true to the tone and lighting established by Charlotte Bruus Christensen, who lensed the first picture. “Since the sequel picks up right where the first movie left off, I didn’t want the audience to be jarred by the film’s look,” Morgan says.

For director John Krasinski, the decision to shoot on film was “nonnegotiable.” Not only did he want to avoid sequel tropes, but he wanted to maintain the feel of the original. “I wanted the first frame to feel nostalgic, and that it was any time and any place,” he says.

Krasinski and Morgan discussed ways to achieve a wider visual approach. They decided on the Panavision Panaflex Millennium XL2 camera and Panavision T-Series anamorphic lenses to enable close-ups and better serve low-light situations as the family leaves the farmhouse and goes out into the world. “We talked about the dynamics of movement through the characters and how we’d capture that,” Morgan recalls. “We also discussed how we wanted certain things to feel grand and other scenes to feel within the family.” Anamorphic lenses helped deliver the intimate shots: “I could get the lenses close to the actors and still hold focus.”

They also looked at modern Westerns for inspiration: “There Will Be Blood,” “True Grit” and “No Country for Old Men” — the latter two of which “Quiet Place Part II” production designer Jess Gonchor worked on — all served as ideas in helping to create the film’s color palette.

In the sequel, the power grids are still on since no one was able to turn them off and life hasn’t been normal for more than a year. That means the bulbs in the grids have expired, Morgan posits, so she used moonlight or ambient night light to inform her decisions. On occasion, visible light sources would be primary, so the characters  are seen in silhouette.

Gonchor found an old train car that he shipped in. It was big and practical and had tinted windows. It’s used during a sequence when Regan (Millicent Simmonds) is alone on the train; since she’s deaf, there’s no sound in the scene. Morgan set up a lighting crane to stream daylight in through the camera. By doing that, the light bounced off the floors and underlit Regan’s face to keep it mysterious. “I wanted to create tension and be with her as she explores this place,” Morgan says.

While she enjoyed working with film, there were sequences where digital had to be used because the environment couldn’t accommodate film cameras. “We ended up shooting an arena scene at night on digital because we could use its sensitivity to see out into the water at night,” she says. Other times, conditions were too cramped: “We did a scene in Emily’s Volvo because we simply couldn’t fit a film camera in that car to get the shots we needed.”

Krasinski jokes that he probably terrified Morgan while shooting those scenes. Not only did he want to place the audience in the car with Blunt, but he wanted viewers to be walking the street with his own character. The opening sequence features the most stunts and a large number of visual effects to achieve that proximity. Says Krasinski of his DP: “She was the most can-do person.”