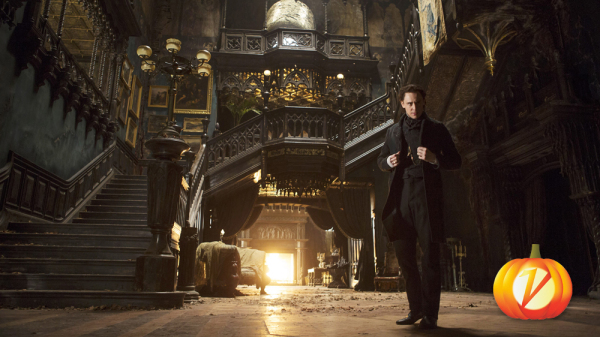 A big part of what makes for a good fright is settling into the time and place of a particular story. From early horror works like “Nosferatu” to classic movies such as “Dracula” and “Frankenstein,” the realms that cinema’s scariest creatures inhabit all feel specific and full of life — even of the undead variety.

Haunted castles, abandoned hotels and stately manors are par for the course for horror movie fans, but finding luxurious worlds to dive into makes for the best nighttime viewing. The gothic styling of Guillermo del Toro’s fantasy films and the grotesque surreality of Tim Burton’s stop-motion oeuvre both pull viewers into their cinematic domain.

The opulence of vampire stories, the baroque design of period films and the fairytale whimsy of dark fantasy movies make for a perfect Halloween horror binge. Ranked from spooky to downright terrifying, here are 13 movies with immaculate production design viewers will find easy to get lost in.

Max Schreck’s gangly, wide-eyed performance as Nosferatu would be remembered even without the vampire’s medieval abode, but the sparse castle adds to the figure’s unsettling demeanor. Count Orlok’s menacing stare from the bedroom door and iconic shadow as he creeps up the stairs are two of the film’s best-designed moments.

The Nightmare Before Christmas (1993)

At times, Tim Burton’s “The Nightmare Before Christmas” feels like 90% production design and 10% story, but the look and feel of the stop-motion animated world is engulfing. Viewers are introduced Jack Skellington and his town of misfit characters in the film’s opening musical number set to Danny Elfman’s “This is Halloween.”

Jemaine Clement and Taika Waititi breathed new life into the mockumentary format with “What We Do in the Shadows,” thanks in no small part to the ironic clash between clever jokes and dead serious set design. Old photographs, sketches and draconian paintings decorate their decrepit Victorian manor that serves as a haunted house for the bumbling trio’s unlucky guests.

There’s a reason “The Cabinet of Dr. Caligari” is the ultimate example of German expressionism. The use of paint to convey perspective on skewed walls and floors lends a dreamlike quality to director Robert Wiene’s twisty mystery story.

A vacated snow resort becomes the playground for ghosts that haunt the Overlook hotel and infect the frustrated author Jack Torrance. Steadicams sweep through the calculatingly designed massive sets. From the gold ballroom to the mint green suite, the film’s team of designers find inventive ways of portraying the metaphysical rot inside the pristine hotel.

Joel Schumacher’s adaptation of Andrew Lloyd Weber’s “The Phantom of the Opera” immerses viewers into production designer Anthony Pratt’s Opera Populaire, the nineteenth century Parisian opera house that’s home to the elusive “O.G.” A.K.A. the “opera ghost.” Schumacher’s camera, thanks to cinematographer John Mathieson, travels through every requisite corridor, hidden passage and masquerade in the music hall. A standout set piece finds the titular Phantom ferrying Christine Daae, the object of his unrequited love, to his lair in the catacombs beneath the opera.

A dazzling reliance on deep focus and period costuming differentiate Jack Clayton’s “The Innocents” from other adaptations “The Turn of the Screw” by author Henry James. Filmed in black and white, the movie uses stark contrasts in lighting to enhance the ghost story of a young governess looking after children she believes to be possessed.

Guillermo del Toro’s 2006 dark fairytale sees the filmmaker visit the underworld for what is one of several times in his vibrant filmography. The Oscar-winning Mexican director’s film journeys from the harsh Spanish frontier to an immaculately detailed fantasy realm filled with unsettling creatures that are instantly recognizable. A standout sequence involving the “Pale Man” as played by frequent collaborator Doug Jones highlights the filmmaker’s consistent use of practical effects.

The lab of Victor Frankenstein set the gold standard for all mad scientists that followed. Boris Karloff’s lifeless, mismatched body lies on the hoisted operating table under the pop-art chandelier that channels lightning to bring him to shambling life. The tableau presents a stunning vision of Mary Shelley’s definitive sci-fi text.

Bela Lugosi’s iconic performance might be what comes to mind when people think of Universal’s classic monster movie, but Herman Rosse and John Hoffman’s uncredited design work is what transports audiences to Transylvania. From the cobweb-filled castle to the legendary vampire’s underground caves, “Dracula” delights viewers with its classical architecture in stunning wide shots.

By all accounts, “The Godfather” is Francis Ford Coppola’s magnum opus, but 1992’s “Bram Stoker’s Dracula” sees the director at the height of his craft, using every cinematic trick in the book to luxurious effect in the famous vampire fable. In harmony with Thomas E. Sanders’ production design, Coppola’s take on the story drops the mannered tone of Tod Browning’s 1931 classic and replaces it with a tragic sensibility more concerned with ancient star-crossed lovers. Forced perspective, clever use of shadow and practical in-camera effects imbue the film with a sense of tactility at every turn.